Back to all posts

New Single, "Rocks In The River" released to radio

In tandem with the announcement of a July 1st release date for her latest album, Turn This Heart Around, Cincinnati area singer and bandleader Missy Werner is heading for the airwaves with the project’s second single, “Rocks In The River,” available today to broadcasters via AirplayDirect . The song, an ode to enduring love, follows the album’s first single, “I Always Do,” which reached #3 on the Bluegrass Today airplay chart late last year.
Written by IBMA Songwriter of the Year Eric Gibson—it’s his first “outside” cut—“Rocks In The River” is drawn from the half of Turn This Heart Around that features Werner on mandolin, with her Missy Werner Band (banjo man Jeff Roberts, guitarist Tim Strong and bass player Artie Werner) and fiddler Brandon Godman.  Another half-dozen of the album’s cuts, including “I Always Do,” presents Werner purely as a vocalist, with support from an all-star group assembled by producer Jon Weisberger, while a traditional-style gospel quartet made with still another all-star cast rounds out the project.
Like its predecessor, Three Kinds Of Lonesome, Turn This Heart Around relies on contributions from a broad range of modern bluegrass and country songwriters, as well as new version of two bluegrass classics, “I Just Got Wise” (Carter Stanley) and “Rough Edges,” written by the late Randall Hylton.  But whether old or new, edgy or straight-up traditional, each performance is focused on Werner’s instantly recognizable vocals, placing them in just the right setting to bring out the unique character and content of the song. 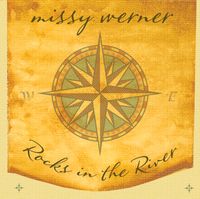